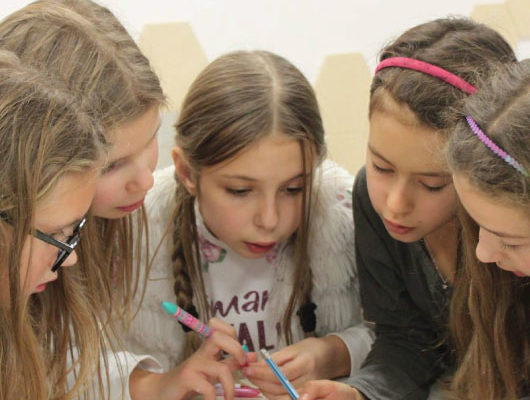 During the week CISC_Kyiv hosted the School round of “STEM in school” tournament.

The teams from 5-9 grades participated in the competition. The tasks involved different branches of natural and exact sciences: mathematics, chemistry, physics, biology, logic and geology.

Among the teams from the 5th grades, the victory was achieved by the team of girls “Cookies” from 5.1. class, ” consisting of: Anastasiia Bondar, Solomia Zhyvotovska, Dasha Reznikova, Maria Skrynnik and Diana Tarnopolska.

Among the 6-grader teams, the first place was won by “Orly” team from 6.1. class, consisting of: Bohdan Ogarkov, Andrij Diachenko, Oleksij Mienko and Gordij Panchenko.

The 9-grader teams kept equal scores in solving the tournament tasks till the very last one!  The victory was achieved by the team from 9.1. class “Rassoll”, i.e. Ruslan Modiagin, Iurij Zalievskyj and Ivan Mryga.

STEM is an educational technology combining several disciplines, and is an instrument for the development of critical thinking, research competences and teamwork skills.

70
Articles
Tutorship through the prism of practical experience